HEAVIER THAN A URANIUM BOAT ANCHOR.
Not for the faint of heart, join John every week to clean the cobwebs off of your speakers. Caution! Not for those of a nervous disposition. 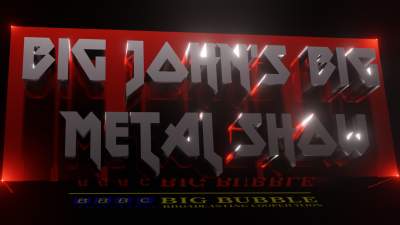 John has moved his blog to a facebook group which you can find here.

Last week's live show with guest James Orez of Escape To What went down rather well and was a lot of fun to do. It was 100% live and unrehearsed, as live radio should be! Seat of your pants stuff! This week I'm featuring a few more new bands I've recently discovered, mainly on Twitter and who, in my opinion deserve lots of 'airplay'. If you have any requests for tracks for me to play email me here or at BJBMS666@outlook.com. Follow me on Twitter:@moshing_don Facebook: @BigJohnsBigMetalShow Instagram: bigjohnsbigmetalshow

I, Big John was a spotty 12yr old boy scout being driven to hospital with a fish hook stuck in my face way back in 1970 when I had my first introduction to heavy metal, which is quite metal in itself really. Black Sabbath's 'Paranoid' was on the minibus radio, I was instantly transfixed and things were never the same from then onwards. Whilst obviously loving all kinds of music, my love for the genre is as strong as it ever has been and this is evident in my show which, incidentally, was created whilst incredibly drunk. I was asked to create an 'audition' show for station approval after slagging off the music they were playing and the rest is history!

I play the songs as the artist intended, very loud with no censored lyrics so if you're easily offended go and listen to Craig Avery, you'll be safe there!! And despite OFCOM threatening to 'brick my effing windows' I shall continue to push boundaries until I'm finally sacked.

So tune in, turn it up, devil horns in the air and seriously annoy your neighbours!